Background
I was 15 years old when the world’s worst nuclear accident occurred at Chernobyl in, what was then, the USSR. The accident happened in the early hours of 26 April 1986 but we did not hear about it in the UK until some days later, when Swedish scientists detected abnormally high levels of radiation in their atmosphere.

Due to the secrecy of the Soviet Union, it took some additional time before the enormity of the accident became apparent, by which time a cloud of radiation had already swept across the north-west coast of England, where I grew up, and poured its contaminated rain down upon us.

I still have a vivid memory of sitting in my Politics ‘O’ Level class and my teacher, Mr McLoughlin, talking to us about the reactor burning out of control and how it may sink into the earth. It struck me that this was a disaster beyond anything I had experienced in my life, at that point. And that memory, from a day in my final year of secondary school, has never left me.

I continued to think about Chernobyl over the years but my interest was seriously reignited after I met my husband. His family originally come from Ukraine and he still has close relatives in Kiev, which is only a two-hour drive from Chernobyl. We visited them shortly after we met and, as we sat down for Easter dinner, they told us how they had to flee Kiev for three years due to fears about radiation from the disaster. During that visit, we found out that it was possible to take an official tour of the exclusion zone and we pledged that we would do it on our next visit.

This year, on 26 January 2016, almost 30 years after the disaster, we fulfilled that pledge.

We arrived in Kiev two days prior to the tour, and were greeted with a temperature that was 20 degrees below freezing. That first day, there was an extremely heavy snowfall, which left more than six inches of fresh snow across the city and surrounding areas.

Journey to Chernobyl
On the day of the tour, we boarded the small minibus in central Kiev at 08.30am and set off. Kiev is well equipped to deal with harsh winter conditions and all the roads out of the city had been cleared by snow ploughs. For the first hour of the drive we saw numerous gritters and snow ploughs actively keeping the highways clear.

We stopped to fill the minibus with fuel and we were advised to take a toilet break, as it was the last place we’d be stopping before the exclusion zone.

The petrol station was in quite a remote area but it was nothing compared to the second part of the journey. As we left the petrol station, we approached a roundabout. Two of the exits had been cleared of snow but the exit straight ahead, which we took, had not been cleared. It looked untouched. It seemed odd that it had been left by the snow ploughs, as it was a major road. It took me some time to realise why. We had been driving for a good ten minutes or so when I finally realised we hadn’t seen a single vehicle coming from the opposite direction. We were on the road to the reactor.

It was the eeriest journey I have ever taken. We drove by abandoned bus shelters. We sped a long the road at quite a rate but I began to notice, through the trees, that there were abandoned homes, with trees growing through their windows and roofs. With the thick snow all around, it felt like we had entered a sinister fairy tale by the Brothers Grimm.

We eventually arrived at Chernobyl Town, where we had to pass through a security checkpoint. When I showed my Ukrainian cousin the sign on the edge of the town, which you see as you are leaving, she explained it says “Happy Journey”. I thought of the tens of thousands of people living around the reactor, being ferried out on buses swiftly put on my the Soviet government a couple of days after the reactor exploded. They were told they had to leave for three to five days. They were never allowed to return. Happy Journey…..

The Russian Woodpecker
The first stop on the tour was the Duga radar – commonly known as the Russian Woodpecker, due to the sharp, repetitive tapping noise it made on the shortwave frequency. The Duga was a Soviet over-the-horizon radar system used as part of the Soviet ABM early-warning network.

We arrived at some Soviet-era gates and we greeted by a government security guard. A number of staff work within the exclusion zone in a variety of roles but they are only allowed a maximum of 15 consecutive days. They must then take 15 days off, to limit their exposure.

We walked through the deep snow toward the abandoned Duga control room.

The building is in ruins and any fears about potential radiation exposure were quickly replaced by the fear of falling through the numerous large gaps in the floor, and whether asbestos had been used in the construction of the building!

We walked through the various floors of the building with a real sense of trepidation. Despite knowing it had been abandoned for 30 years, I also had a strong sense of being watched.

It was a fascinating place though.

The Radar
After the control room, we then walked on to the Duga radar mast itself. The ‘Russian Woodpecker’ hasn’t made its distinctive noise on the shortwave frequency for decades. There is now only silence in the land surrounding it. I can’t remember the last time – if ever – I have been somewhere so quiet. I am used to the daily cacophony of London life and this was at the other extreme. However, once I actively listened, even here – a place where no one has lived for thirty years – there was a subtle audio. There was no specific sound, no recognisable sounds of nature. It was the barest sound, unlike anything I’ve experienced before.

The radar is quite extraordinary; a colossal piece of engineering. I felt tiny standing next to it. Not only because of its incredible size but also what it stood for. A system built to detect impending nuclear catastrophe from a suspected enemy abroad. 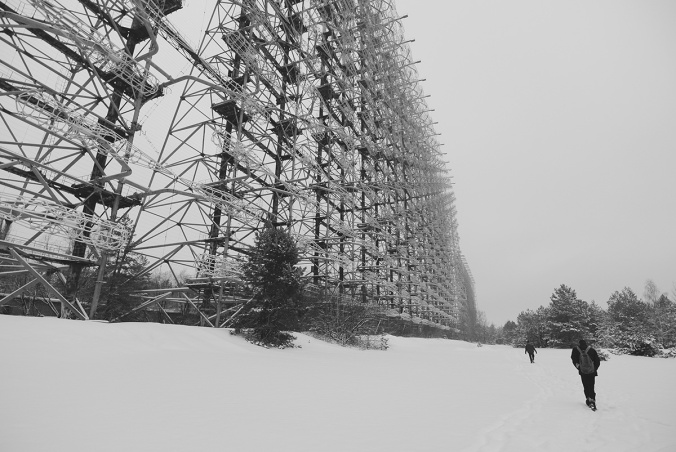 How ironic that, while it was actively listening for a foreign nuclear threat, it should have its back to a very real nuclear threat that was about to unfold at home. A threat which would ultimately bring about its own demise and the demise of the very people it was meant to protect.

The Kindergarten at Kopachi
After leaving the Duga, we travelled on to a place which was, for me, a particularly eerie part of the journey: a kindergarten in the abandoned village of Kopachi about 4km from the Chernobyl nuclear power plant.

The type of radiation released during the accident is most likely to cause thyroid cancer in humans and children are the most susceptible to thyroid cancer because their developing thyroid soaks up the radiation like a sponge. 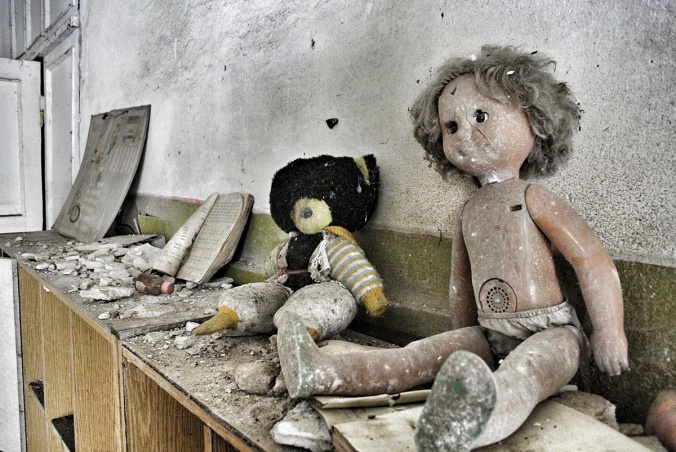 The levels of radioactivity at the kindergarten were very high and we were only allowed to stay for ten minutes. It was ten minutes dominated by the ghosts of young lives, cruelly destroyed by radiation, upheaval, trauma. Toys left abandoned. Precious belongings crammed into the one or two cases that families were allowed to take onto the Government buses that took them to their new, unfamiliar homes. Wondering how many survived, how many succumbed to the radiation that they were exposed to while their government decided whether they could hide the true scale of the disaster. 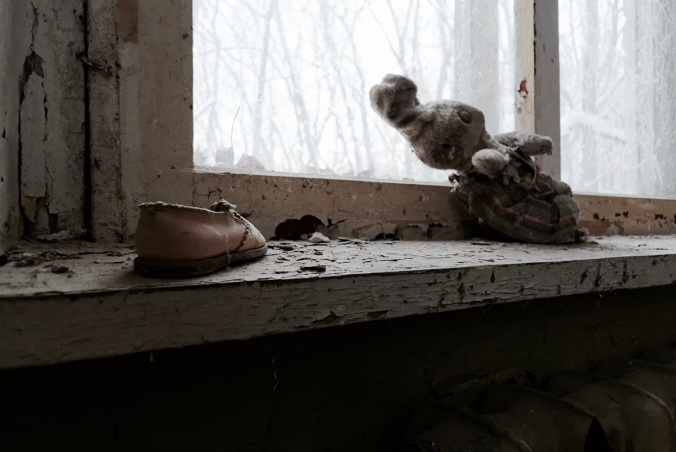 Reactor No. 4
After visiting the kindergarten at Chernobyl, we travelled on to Reactor No. 4, which exploded during the accident. Many firemen were sent to their deaths trying to contain the fire – their radiation exposure was so massive that many of them died within 14 days, the maximum time humans tend to live following a serious overdose of radiation. 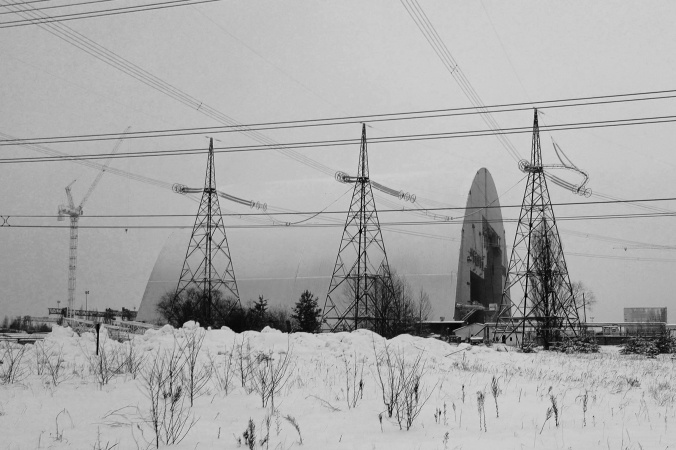 A massive new sarcophagus is being built to cover the old concrete case. It is too dangerous for workers to build it directly over the existing case, so it is being constructed on rail tracks and will be slid into place once it’s ready. It was due to be finished by now but is running behind schedule and it is hoped it will be in place by 2017.

The new sarcophagus has been designed to last 100 years. Our guide told us that the half-life of the plutonium in Reactor No. 4 is 25,000 years……

Pripyat
Pripyat was founded in 1970, a nuclear city built with the purpose of housing families who worked at the nuclear facility. 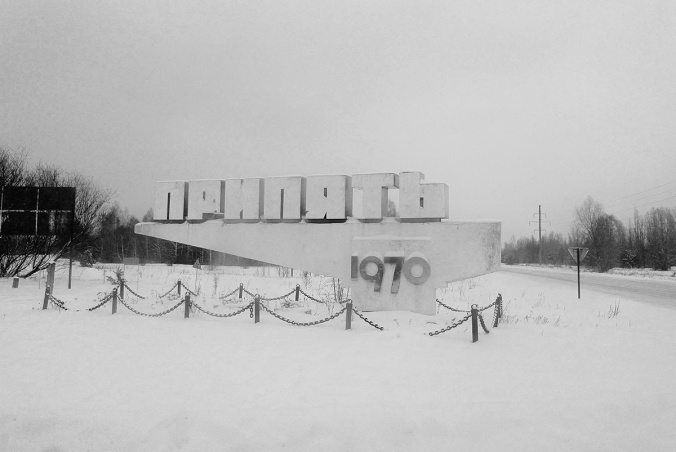 Pripyat is extremely close to the reactor and on April 26th, 1986, the weather was particularly fine. Unaware of the severity of the accident and the huge levels of radiation spewing out from the damaged reactor, many residents of Pripyat spent the day outdoors. Sadly, they were not only soaking up the rays from the sun.

Amusement Park
A small amusement park had been built for the forthcoming May Day celebrations in 1986. It was never officially opened. It now stands, decaying.

Seeing it covered in snow, with only the garish colours of the Ferris Wheel providing visual relief to the whiteness, it again felt like I had stepped in to a sinister story – a ghost story in a ghost town.

School and Leisure Centre
The final part of the tour involved the leisure facilities and main school in Pripyat. 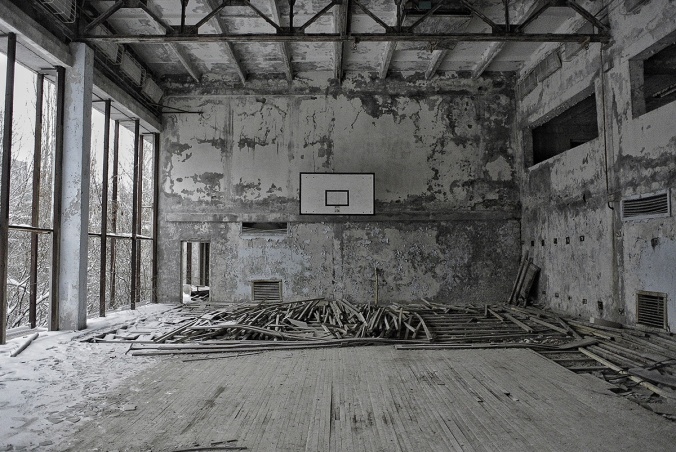 The Chernobyl accident was a tragedy for everyone in the area but there was something particularly painful about visiting this area.

For me, this was the most disturbing part of the tour. The kindergarten was unsettling and eerie, but the High School had a greater impact on me. I couldn’t help thinking about all the students, approaching adulthood, with all their hopes and dreams and aspirations, only to have their whole world turned upside down overnight. I can’t really begin to imagine the confusion and the fear, not only about leaving your home with two-hours’ notice but also the ongoing fears about radiation exposure.

The Journey Home
After we left the exclusion zone, we made the two-hour drive back to Kiev. We were driving for well over an hour before we saw another vehicle. I thought a lot about what happened to the people of Chernobyl over the last 30 years. Where did they end up living?, What long-term emotional and physical effects has the disaster had on each one of them? Not only from radiation exposure, but also from the stress and trauma they endured.